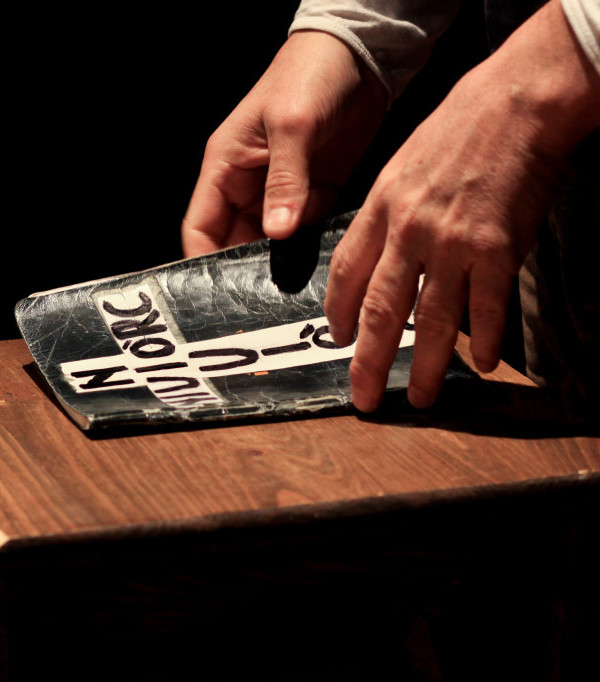 On June 13, Francesco Foti, as part of the Italian Theatre Festival “In Scena!” presented his solo show, a true travel-diary-story divided into chapters, performed in Italian, with a little of ‘Italianized English’ here and there…

Francesco Foti describes his complicated relationship with New York as a “fight between lovers.” How many of us feel like this?

Probably not just the many people from all around the globe who courageously move to the Big Apple, but also the New Yorkes, often struggle with the complexities of a city involving so many cultures and presenting so many opportunities everyday. This is the price anyone who benefits from its unique living experience pays.On the 13 of June, as part of “In Scena!” –  the first Italian Theatre Festival to go around all NYC’s five boroughs, Francesco Foti, presented the US premiere of his solo show “Niuiorc Niuiorc,” at Casa Italiana Zerilli Marimo’. Foti wrote, directed and performed the play in Italian, using ‘Italianized English’ here and there.

“Niuiorc Niuiorc,” which means “New York”  but written out as Italians with strong accents would pronounce it, is Foti’s representation of a true travel-diary-story divided into chapters or “cuts” as Foti likes to emphasize: “ ‘cut’ sounds much better than the Italian ‘taglia’.”

By sharing his own experience, Foti puts on display a genuine representation of the feelings, thoughts, emotions and complexities that Italians face when moving to New York, in his case, for the brief time of an English course. Some of his first impressions, which also brought back my memories of that horribly humid summer of 2008, a new chapter of my life – my move to NY, were the amazingly high buildings which had him stand with his nose up in the air and all the sudden smells that had him bring it down wondering where they came from (such as the ‘steamy drains’ that “in movies seem fascinating because they don’t smell” Foti pointed out.)
The small size of his first hotel room, unusual for us Italians, the impossibility to change it because of it being of normal standards for an apartment in NYC, and the strident “Excuse Me Siiirrrr” of his hotel concierge, who “never smiled,” were just few of the first details which Foti extrapolated from his diary (which he holds throughout the play and which cover reads “NIUIORC NIUORC”) and made the Italians in the audience (not only), laugh out loud.My dear friend Tavy who moved to NY from China, even though he didn’t understand Italian, found all of these details very alike to his moving experience. How did he understand what Foti was talking about if he didn’t know the language? Foti showed an amazingly involving performance throughout which he never lost energy, even though he had problems with the music which didn’t start or stopped when it was supposed to. This made the audience laugh with him even more.
The Zabar’s where Foti would have most of his meals and meet some particular New Yorkers like Mr. Really, the owner of the Zabar and Madam Mim, a very particular everyday customer, is one of the central locations where the chapters of his journey take place. This is where Foti points out other small details that strike Italians when first moving to New York as the really not “small” coffee size and the never heard of variations of coffees which have Italian names but have nothing  Italian about them.  The same thing he experienced in Little Italy, a neighborhood where Italians living in Italy expect to find the real Italian community living abroad, but which really is reduced to just a street block of Americanized Italian restaurants.
At the Zabar’s, Foti’s reference point, he would  meet Candida, a girl who has him lose his mind and who will surprise him towards the end of his stay in NY.
Francesco Foti is fascination in acting out all of the chapters of his journey while involving the audience, which laughs and follows him through it. Throughout the play he successfully manages to determine what is so particular about a journey to New York for Italians. In the last chapter he reflects on how he found out a new himself through all of the difficulties he faced. “What is so particular of being here compared to Italy?” Foti asked. “Myself” he answered after a little. “It is true” I thought. In New York, Italians are forced to take out a part of them which is different from who they are in their homeland. Without all of our commodities such as familiar food, known spaces, our people, we learn how to be different, how to adjust to things that are uncommon to us, we learn how to be New Yorkers. We definitely grow as people and experience a new state of open mindedness.
Foti’s thoughts had me reflect on my own experience of moving to New York and I found my final agreement in his statement in the brochure of NN that I read on my way back home: “I thank all of the people that left something for me but especially, I have to thank my own willingness to learn from them.” Moving from ones own homeland takes guts, and one must be strong to keep up with the difficulties that the process implicates.Foti will perform “Niuiorc Niuiorc” again at JACK (505 ½ Waverly Ave) in Brooklyn on June 19 at 8 PM. It is a show I highly recommend to both Italians and New Yorkers because of the liveliness with which Foti brings the audience on a journey that involves challenge, self discovery, humor and so much more.
[fonte link]
Print Post
0